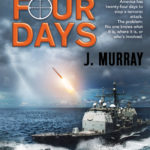 Available only on Kindle

A former SEAL, a brilliant scientist, a love-besotted nerd, and a quirky AI have twenty-four days to stop a terrorist attack. The problems: They don’t know what it is, where it is, or who’s involved.

What Kirkus says about Twenty-four Days:

A blistering pace is set from the beginning: dates open each new chapter/section, generating a countdown that intensifies the title’s time limit. Murray skillfully bounces from scene to scene, handling numerous characters, from hijackers to MI6 special agent Haster. … A steady tempo and indelible menace form a stirring nautical tale

World-renowned paleoanthropologist, Dr. Zeke Rowe is surprised when a friend from his SEAL past shows up in his Columbia lab and asks for help: Two submarines have been hijacked and Rowe might be the only man who can find them.

At first he refuses, fearing a return to his former life will end a sputtering romance with fellow scientist and love of his life, Kali Delamagente, but when one of his closest friends is killed by the hijackers, he changes his mind. He asks Delamagente for the use of her one-of-a-kind AI Otto who possesses the unique skill of being able to follow anything with a digital trail.

In a matter of hours, Otto finds one of the subs and it is neutralized.

But the second, Otto can’t locate.

Piece by piece, Rowe uncovers a bizarre nexus between Salah Al-Zahrawi–the world’s most dangerous terrorist and a man Rowe thought he had killed a year ago, a North Korean communications satellite America believes is a nuclear-tipped weapon, an ideologue that cares only about revenge, and the USS Bunker Hill (a Ticonderoga-class guided missile cruiser) tasked with supervising the satellite launch.

And a deadline that expires in twenty-four days.

As America teeters on the brink of destruction, Zeke finally realizes that Al-Zahrawi’s goal isn’t nuclear war, but payback against the country that cost him so much.

What sets this story apart from other thrillers is the edgy science used to build the drama, the creative thinking that unravels the deadly plot, and the sentient artificial intelligence who thinks he’s human.

Cue the cameras, because this book would make a great movie! I could see it playing out in my mind while I read. While I normally don’t read military or techno-thrillers, I was in good hands with Murray. The author explains things without slowing down the action. While I can’t say I understood all the finer details and jargon, I thoroughly enjoyed the ride, and the final climactic scenes had me on the edge of my seat. Also, with this second book in the series, we get to know the main characters in more detail, including Otto, the AI that helps thwart the terrorists. In this book, Otto gets a robotic body, and it’s a hoot seeing him adapt to it.

Murray’s technology and naval knowledge, including the inner workings of a sub, are impressive. The amount of research that went into the book must be great. “Twenty-four Days” is a strong and exciting follow-up to “To Hunt a Sub.”

Twenty-Four Days takes us into the world of military technology, with two countries hurrying to find their missing nuclear submarines. As with To Hunt a Sub, I was amazed at the author’s level of knowledge about all things military. I especially loved the way each chapter was part of a countdown to the 24 days referenced in the title. It added urgency to the story that intensified the reading experience. You’ll love this one!

Twenty-Four Days keeps you going with all sorts of wonderful elements. The characters are well developed and intriguing. There are wonderful cliff-hangers throughout the book. This would make a fantastic movie.

I was an avid fan of Murray’s military thriller To Hunt a Sub, and her second book, Twenty-four Days, somehow managed to top the first. Though it isn’t necessary to have read the first book before diving into Twenty-four Days, I do recommend it. Murray mentions backstory but doesn’t spend a lot of time on it, so I liked having a solid grasp of the network of main characters prior to jumping into the new novel. It increased my enjoyment of this torpedo-paced book. Torpedo-paced is an accurate description. This book starts off full speed ahead and keeps it up to the last page. For readers who love thrillers with twisting plots, plenty of intrigue, and a race against time to uncover and stop a multi-pronged terrorist attack, Twenty-four Days hits the mark. Not until the very end is the master plan understood, and foiling the plot takes right up to the last page. I’m a slow reader, and I whizzed through this book.

One thing I enjoyed about To Hunt a Sub was the technical reality Murray created for both the scientific and military elements of the book. I completely believed the naval and investigatory hierarchy and protocols, as well as the operation inside the sub. This book is just as convincing as the first but with the addition of a battleship. The operation, acronyms, and lingo were technical, realistic, and occasionally over my head, but never to the degree that I was lost. Rather, I was thoroughly convinced that Murry is a submariner!

The science behind both reads is well researched and felt completely authentic, from cutting-edge military science and technology to the capabilities of artificial intelligence. The first book introduces the reader to Otto, a computer-housed AI. He was effective and fascinating but not terribly engaging. In Twenty-four Days, Otto gets a mobile body and the algorithms necessary to acquire a personality. He becomes a captivating character in the story and was one of my favorites as he participates in problem-solving and saving the world from war. The whole cast of characters is well drawn, their personalities, emotions, and relationships believable. There isn’t a lot of downtime to get to know them deeply though – the main reason to start with the first book.

All in all, a thrill of a read – 5 stars and highly recommended. I’m already looking forward to the next one!

If you’re a Tom Clancy fan you will love this book.This tense, fast-paced thriller is a page-turner that will keep you up wondering if what Jacqui has written could really happen. The brutal Islamic terrorists were ripped from today’s headlines. Otto won my heart. I will not tell you who Otto is, you have to find out what he is capable of and how his special talents help win the battle over good and evil. Maybe this book was a top secret mission that was sent to Jacqui in a brown envelope. We will never know.

Series: Book II in the Rowe-Delamagente series. See  To Hunt a Sub for Book I

This entry was posted in WordDreams.

« Building a Midshipman
To Hunt a Sub »